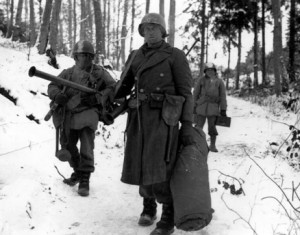 Earlier we wrote about the Christmas Truce of 1914—an unofficial ceasefire in which Allied and German soldiers fighting in World War I joined together to celebrate Christmas. Another similar event occurred 30 years, on Christmas Eve, 1944.

Fritz Vincken, a young boy, was spending Christmas with his mother in a cold shack in the Belgian Forest. Allied troops had invaded Normandy the previous summer, and the Battle of the Bulge was in full swing.

On this cold, winter night, Fritz said a knock came to the door. His mother opened it to find three American soldiers lost and looking for a warm place to stay. Although Fritz and his mother were German, they invited the young men inside to warm by their fire and share dinner. A short time later another knock came. Four tired German soldiers stood in the doorway, also looking for a warm place to stay.

Fritz’s mother told the German and American soldiers they all could stay in the shack on one condition: No fighting.

The men agreed, and though tense at first, Fritz writes the nine of them—himself, his mother, and the seven soldiers—sat down to enjoy a Christmas meal of potatoes and chicken together. The soldiers helped bandage one another’s wounds, and spent a peaceful night in the tiny shack.

When dawn broke, the men parted ways, each returning to their respective armies. Years later, President Ronald Reagan recalled the story during his visit to Bitburg, Germany, saying, the men “had their own private armistice.” But maybe Fritz Vincken’s mother said it best when she often recalled that night, saying, “God was at our table.” I imagine she said that because nothing less than the power of God could have brought peace to a Christmas dinner with such unlikely guests.

We hope you and your family know the peace of Christ this Christmas season. We appreciate your friendship, your financial support, your kind words, and your prayers more than you know.

May your Christmas season be filled with the kind of peace only God can bring.